The “new world” of work: New World Symphony Brings Developers together to Build the Future

This year’s New World Symphony, powered by the Symphony Software Foundation, was an exciting day of coding and workshopping that got us one step closer to a “new world” of work within the Symphony platform.

The goal of New World Symphony was simple to explain, but challenging in execution:

By 10 am, everyone was in their seats and hard at work coding various projects--from machine learning to automation tools to research bots, the teams were up to the challenge and ready to impress the judges!

While there were several benefits that came along with contributing a project to Symphony at NWS, including the access to Symphony API and support of our developer community, the deal was sweetened with the following additional prizes:

The morning was filled with buzzing discussions, rapid coding and networking moments among the teams. Before we knew it, lunchtime arrived—and we had quite the spread!

After a delicious assortment of sandwiches, salads, bruschetta and more, the developers went back to coding for the final half of the NWS.

During these last four hours, teams polished their projects and presented to the judges so that the process of selecting a shortlist could begin. There was plenty of networking along the way as well!

Once coding was completed, the judges announced the finalists— it was a close competition and all of the projects were fantastic, but the judges selected three finalist projects per category: 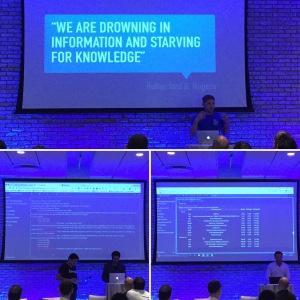 After final deliberations, the judges announced the winners of this year's New World Symphony.

Congratulations to all of our winners! They all really stood out and we are proud of what they have accomplished!

All in all, the Foundation is thrilled that the event was such a success! The creative energy was tangible in the room throughout the entire day, and the Foundation values all of the amazing projects that were contributed.

Thank you again to everyone who participated in this year's NWS - it would not have been possible without you. A special thanks goes also to the organizing team who did a phenomenal job in making this event a success: mentioning everyone would be too long but we want to send a shout out to

Contributed projects are undergoing the contribution process and will be available in the Foundation Github org as soon as they are approved.

And now, we look forward to Symphony Innovate today!