FINOS Team
Thanks to everyone who attended the FINOS Open Source Strategy Forum in New York City last Wednesday. There is no denying the fun and excitement that's rapidly growing in Fintech open source. I was especially proud to see people from all over financial services networking, learning and innovating together. Thank you! 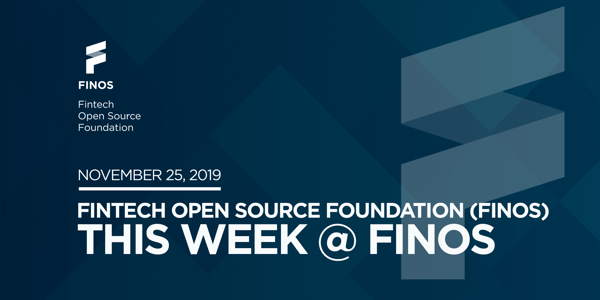 For members and contributors who'd like to relive or checkout what happened at the FINOS Open Source Strategy Forum I very much recommend the #OSSF2019 hashtag on Twitter for a running community commentary of an awesome day. Also, don't forget to add your photos and experiences to the same hashtag on Twitter and LinkedIn.
Also, did you hear, at the Open Source Strategy Forum last week, FINOS Platinum member Goldman Sachs announced its intention to open source two products - a modeling language internally named "PURE", and a visual modeling platform that generates PURE models known in Goldman Sachs as "Alloy" - into FINOS.
Read more about this exciting Goldman Sachs contribution at https://www.finos.org/pure-alloy and join the buzz we're currently feeling at FINOS!
As we approach the end of the first year of the FDC3 1.0 standards, we’re asking for feedback on how well FDC3 is addressing the needs of financial organizations, how we can help you with adoption, and the health of the FDC3 contributor community. Your input will help us improve our support for your organization and the larger FDC3 community. Please take a few minutes to complete the FDC3 Survey.

Here's what's happening in the week of November 25th, 2019 within the FINOS community. Please feel free to forward this email to colleagues and industry partners who you think will be interested in FINOS. If someone forwarded this email to you and you'd like to subscribe, please send a note to community+subscribe@finos.org and you'll be added to the mailing list.
Monday November 25th
Tuesday, November 26th
Wednesday, November 27th
Thursday, November 28th
Friday, November 29th
Looking Ahead:
A full list of upcoming events can be found at www.finos.org/events.

Get Involved. Opportunities for further participation and contribution: