Developer Scholarships - Made Possible by GitHub

While there are many new features attendees will notice at the 2019 Open Source Strategy Forum, one of the ones we're most proud of is our increased focus on developers, and the trickle-down effect of there being more developers in attendance on November 20. 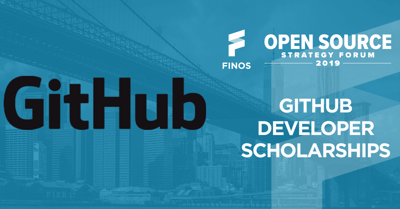 Developers are key to the future of FINOS, as they are the lifeblood of the more than 75 open source projects currently hosted by the Foundation.  The hope is to increase the number of active developer contributors to these projects.
GitHub, a Platinum level member of the Foundation, is making the goal of increasing the number of developers in attendance much easier in 2019 by making Developer Scholarships available.  With its deep developer relationships and long history as being a core tenet of the developer community, we can't think of anyone better to partner with.
Scholarships are available to active open source developers (at least one contribution to an open source project in the past 6 months), and to those with an interest in learning more about the financial services industry and the many current and future projects being hosted by FINOS.
Anyone interested in receiving a scholarship should contact FINOS directly at ossf@finos.org, subject line "Developer Scholarship".  We will respond quickly to begin the very quick process of confirming eligibility and assisting with registration.
Questions about the program can be directed to FINOS at ossf@finos.org.  And many thanks once again to GitHub for making the scholarships possible.
- - - - - - - - - -
Developer related content at OSSF 2019 will be tremendous.  Just a few of the developer-oriented sessions to be featured include:
The C++ Core Guidelines - An Open Source Project
Bjarne Stroustrup - Creator of C++, Managing Director, Enterprise Tech & Services - Morgan Stanley
GitHub for Financial Services extended session - Kevin Alwell, GitHub
Rest APIs - Riko Eksteen
MySQL 8 - Pedro Andrade, Oracle
Goldman Sachs contribution announcement - A golden opportunity for developers

Join GitHub, other sponsors, and 45+ incredible speakers from the worlds of open source, financial services, banking, and fintech at the Open Source Strategy Forum this November 20th, 2019 in New York City.